In an effort to put a spotlight on a few of Maryland's local businesses, Gov. Larry Hogan, as well as Sen. Jim Mathias, visited Pocomoke City's Hardwire Armor Systems on Tuesday, June 21.

Founded in 2000 by George Tunis, Hardwire produces armor technology for application anywhere from the classroom to military environments. Beginning as a company specifically focused on building and bridge protection, Hardwire expanded to military and private armor following the events of 9/11.

Tunis talked about the roots of Hardwire to Hogan, while displaying photos of the decrepit building that once stood at Hardwire's site.

"The building was disgusting," Tunis said. "At the time, that was me alone. My mom cried when she saw the building."

From those humble beginnings, Hardwire has grown to armoring 11 bridges across the northeast, as well as producing various armors, including clipboards, white boards, explosive projectile protection kits and shields, that have been put into use around the globe. Tunis, as well, has received acclaim for his business endeavor, in 2012 being named Ernst & Young's Entrepreneur of the Year for Maryland.

In a video presentation, Tunis showed the capability of Hardwire's vehicle protection systems, which are currently in use by the U.S. military overseas. With a blast, a Humvee is hit by an improvised explosive device, which Tunis showed as weighing two pounds and moving faster than a bullet. As the smoke clears, the vehicle still stands, with only marginal damage to be found.

"You'll see the wheels are still aligned, and the tires are still inflated," Tunis said.

"I imagine that with some of these vehicles that aren't armored at all, the people inside would be dead," Hogan said.

"All of them, all would be dead, the whole thing would be blown up," Tunis answered.

Governor Larry Hogan, State Senator Jim Mathias and Delegate Carl Anderton take a look at the inside of a Hardwire built vehicle at the company's office in Pocomoke City on Tuesday, June 21. Staff photo by Justin Odendhal

From a camera situated inside the vehicle, nothing more than a relatively gentle rocking could be seen.

Along with military applications, Hardwire has produced armor technologies specifically for some prominent local businesses. Tunis displayed a shield designed for Ocean City's Seacrets, which features a display of the Seacrets spiced rum logo, to be used in the event of a riot or shooting. Ranked at level 2A protection, the shields are capable of stopping handgun and shotgun fire. Hogan donned the shield, pointing toward reporters.

"If he was the shooter, you could get to him and get that camera out of his hands," Tunis said, as Hogan raised the shield and crept forward.

"You wouldn't do it slow, though." 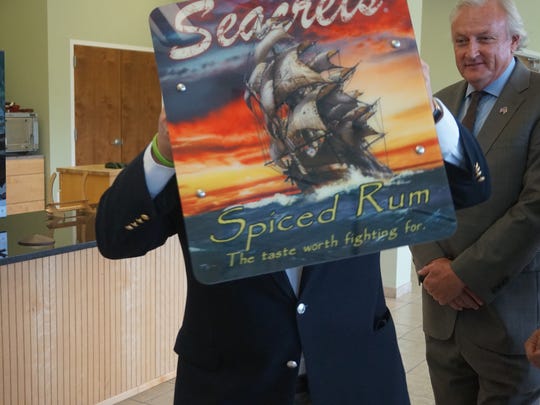 Along with the shield, Tunis displayed a type of lightweight armor, capable of stopping small gun fire while being thin enough to be worn comfortably.

"That's the lightest in the world, and I can tell you how light it is," Tunis said. "My daughter's getting ready to go to Virginia Tech, that's a school that had one of the largest campus shootings in the country. Her present from me is I'm sewing it into a jacket, it's light enough for that."

Tunis also displayed a series of vehicle armors designed to be used in police environments, with the video showing shotgun blasts and large caliber handguns leaving nothing but dents in the glass and door panels. Outside of the facility, Hardwire's business and pricing analyst J.P. Lacey showed some of the technology in action. A Ford Explorer, fitted with the armor systems on both doors, looked almost entirely unarmored from an outside perspective.

Following the tour of the facility, Gov. Hogan gave a statement about what businesses like Hardwire mean to the state of Maryland.

"They've made a lot of products that can be tailored for a lot of different uses, in addition to armoring vehicles for the military and for police officers, they're doing things that have a lot of private uses, things that can be utilized in schools and other places," Hogan said. "It's things that really could save lives in a lot of cases. They're doing wonderful things here and they're poised for growth. The state of Maryland is happy to be a partner with them and assist with that growth, and I think over the next three years. They'll be hiring more people, and it will be great for the economy of Worcester County and the entire state of Maryland."